Or
Request a Call Back!

Snapshot of 1 Day Bangalore to Mysore Tour Package by Car

Bangalore city boasts of not only many interesting sightseeing choices but also an enviable list of weekend getaways varying from hill stations to heritage sites. So if you are looking for a short trip from Bangalore, then Mysore is undoubtedly one of the destinations to plan a visit. Historically rich city of Mysore still presents a glimpse into the stateliness of past accompanied by a vibrant culture and spirituality of equally magnificent religious shrines. Explore this heritage city with our 1 Day Bangalore to Mysore Tour Package.

The distance from Bangalore to Mysore is around 150 km and takes about little over 3 hours to reach it by road. It is advisable to start early from Bangalore so that you can explore all the important tourist attractions of Mysore at leisure. With our 1 Day Bangalore to Mysore Tour Package, you can explore the various historic places, temples, scenic views in a relaxed manner in the comfort of a private cab.

Our cab will pick you from your place of accommodation in Bangalore at a mutually agreed time and from there we will embark on our journey to embrace the quintessential old school charm of Mysore City. This road trip from Bangalore to Mysore will allow you to dive into the culture and vibe of Karnataka.

The distance between the two is approximately 150 km and it will take us less than 4 hours to reach our destination via Mysore Road. In between, one can experience small towns, temples and some of the most scenic landscapes that the state has to offer.

Our first place of interest in Mysore would the Srirangapatna Fort which is surrounded by river Kaveri on one side. It is famous for housing a temple, a mosque and two dungeons. Next, we would visit the Sri Ranganatha Swamy Temple which is located within the premise of the Srirangapatna Fort. After paying our respects here, we will visit Tippu's Summer Palace which is famous for its Indo Islamic architecture and in particular for the walls done with floral motifs.

Next on our itinerary would be the Gumbuz which has the remains of the Mysore King, Tippu Sultan and his parents, Hyder Ali and Fakr-Un-Nisa. Next, we will make a visit to Chamundeshwari Temple which is a hilltop temple nestled in the Chamundi Hills and then to the very colourful Statue of Mahishasura and Nandi which is also located on the same hills.

To include some recreational activity to our 1 Day Bangalore to Mysore City Tour, we will visit the Mysore Zoo which is one of the oldest and the largest zoos of India. Next in our itinerary is the Mysore Maharaja Palace which draws inspiration from Hindu, Mughal, Rajput, and Gothic styles of architecture and is one of the most visited monuments of Mysore.

Further, we will visit the art gallery nestled in the Jaganmohan Palace which is famous for being home to the largest collection of South Indian artefacts. We will then visit the St. Philomena's Church which is the tallest church in Asia and is popular for its Neo-Gothic style of architecture.

We will conclude our one-day Bangalore to Mysore city tour by visiting the Brindavan Gardens whose main attraction is the musical fountain show that can be witnessed during the evenings. From here, our cab will comfortably take you back to your place of origin. 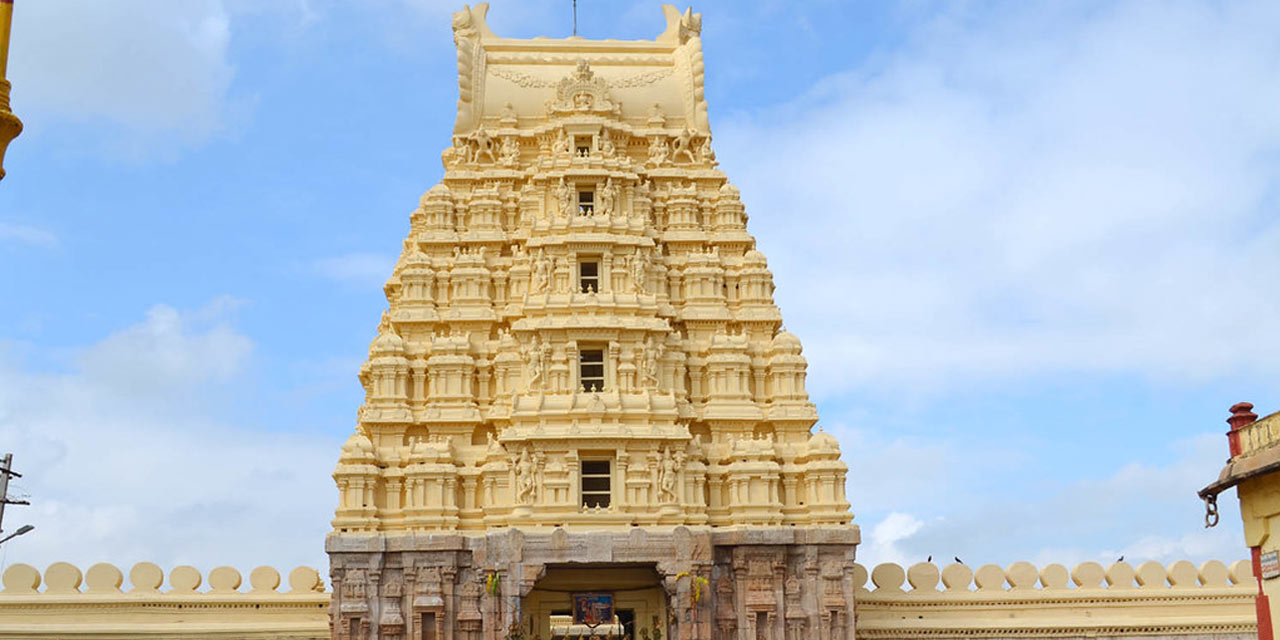 Sri Ranganatha Swamy Temple: Originally sanctified in 984 A.D, this Hindu temple is dedicated to Lord Ranganatha, an incarnation of Lord Vishnu. This temple because of its rich lineage is protected under the Archaeological Survey of India.

On the top portion of the entrance of the main temple, one can find sculptures of the different forms of Lord Vishnu like Lord Narasimha, Lord Vamana, Lord Rama, Lord Krishna etc. It also has 21 detailed pillars and there are two halls, namely, the Mukhamandapa (the front hall) and a Sukhanasi (an Antechamber).

The presence of River Kaveri surrounding the temple also makes it a scenic location and hence is a must-visit in your 1 Day Bangalore to Mysore City Tour. 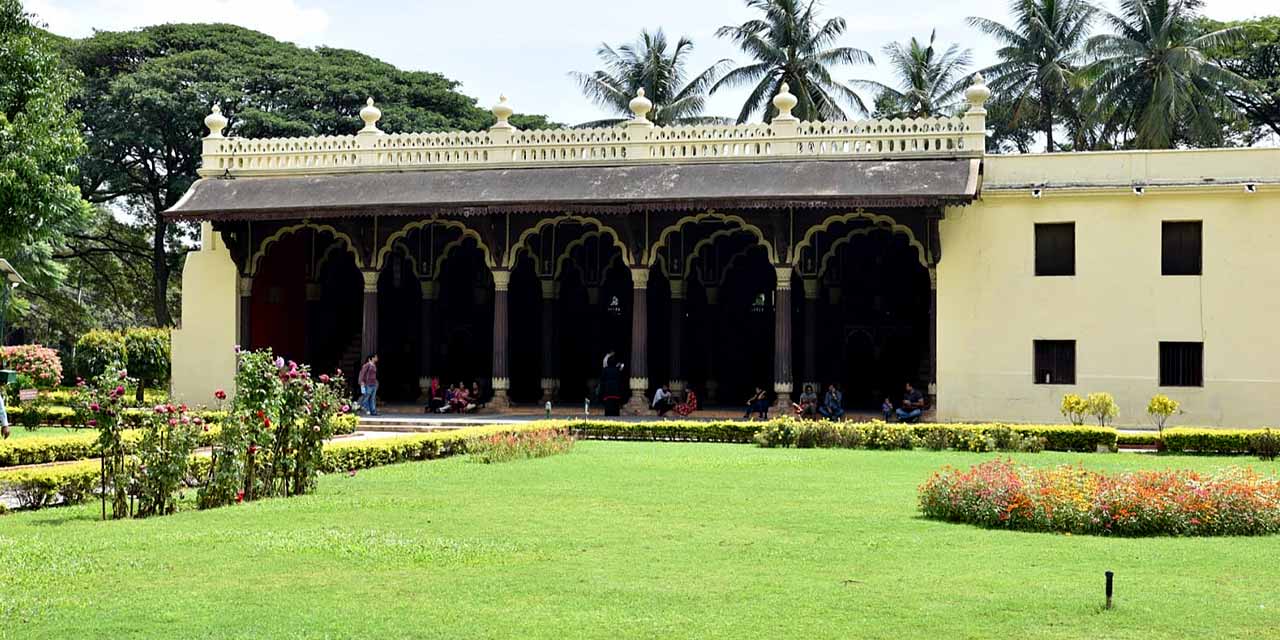 Tippu's Summer Palace: The summer retreat of Tipu Sultan was often called as the ‘Abode of Happiness’ and ‘Envy of Heaven’ by the constructor himself. It is also popularly known as Dariya Daulat Bagh which literally means ‘“wealth of the sea” and its brilliant architecture has been captivating visitors since long.

The construction of the palace began in 1778 by Hyder Ali Khan and was finished by his son Tipu Sultan by 1784.

The wooden and stone structure, intricate carvings, floral designs, paintings depicting scenes of the various battles and portraits of the rulers are a must-see while visiting Tippu's Summer Palace during your 1 Day Bangalore to Mysore City Tour 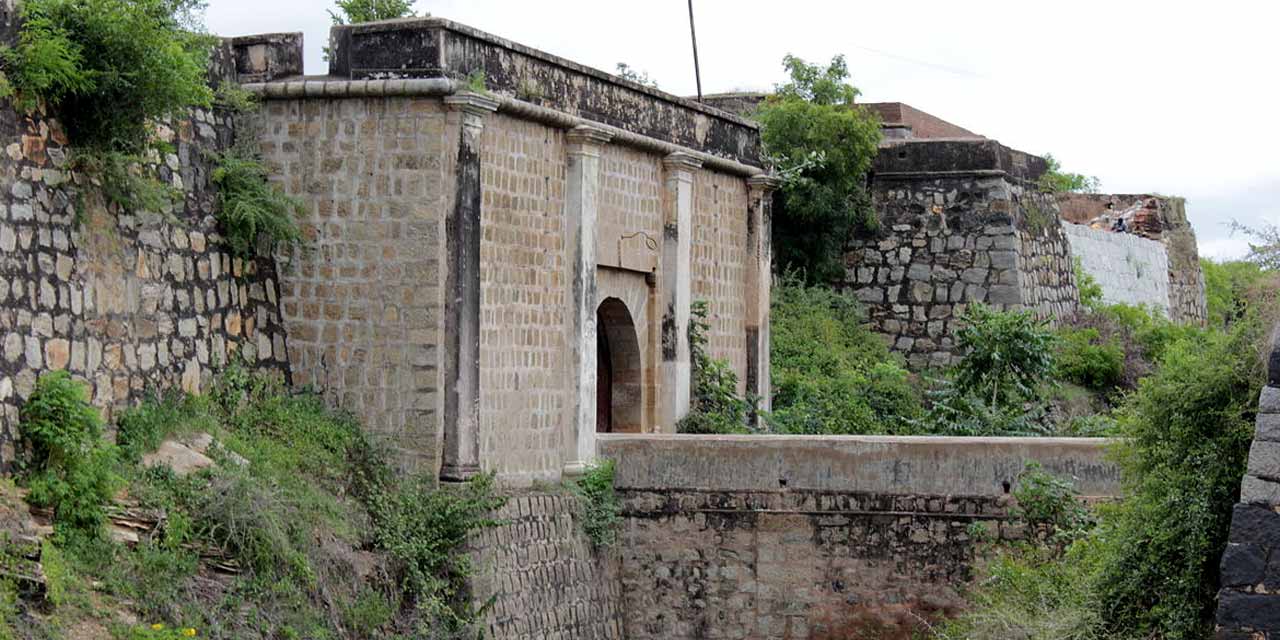 Srirangapatna Fort: Known for its historical significance and architectural brilliance, this fort was originally built in 1454 AD. Initially a mud fort, its present structure was built during the reign of Tipu Sultan.

Its majestic gates and impassable defence system are worth exploring. There are seven entrances, two of the popular ones being the Mysore Gate and the other is the Elephant Gate.

The Ranganathaswamy Temple, the Narasimhaswamy temple and the Juma mosque rest within the fort, all of which adds to the glory of the fort.

Gumbuz: Built-in the Bijapur style of architecture, Gumbaz captivates everyone. The imposing structure of Gumbaz boasts of a cubical structure on an elevated platform with a huge tomb over it.

It is surrounded by a beautiful garden named as Lalbagh Garden and each side of the garden has an entrance that leads towards the mausoleum.

The outside of the Gumbaz looks like a Mini Taj Mahal with intricate carvings. It is also surrounded by 36 black granite pillars and the contrasting colours add to the aesthetics of this monument. 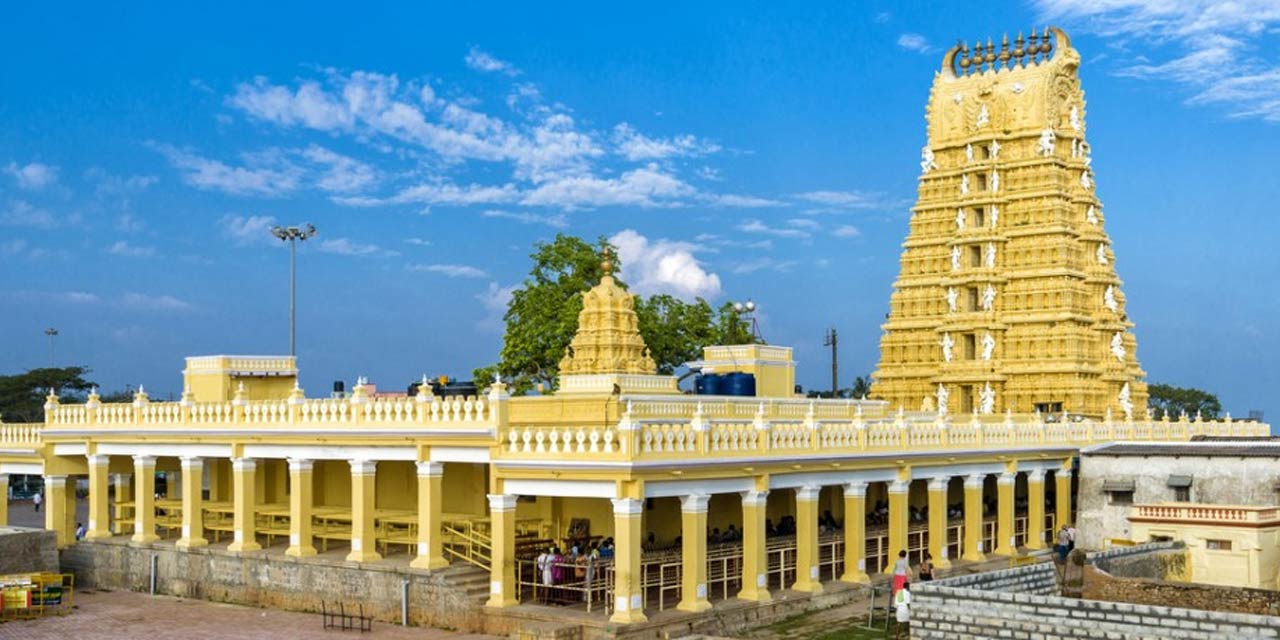 The temple is built in the classical Dravidian style of architecture. Witness a stunning aerial view of the city of Mysore with the cool breeze welcoming you atop the hill.

Statue of Mahishasura and Nandi 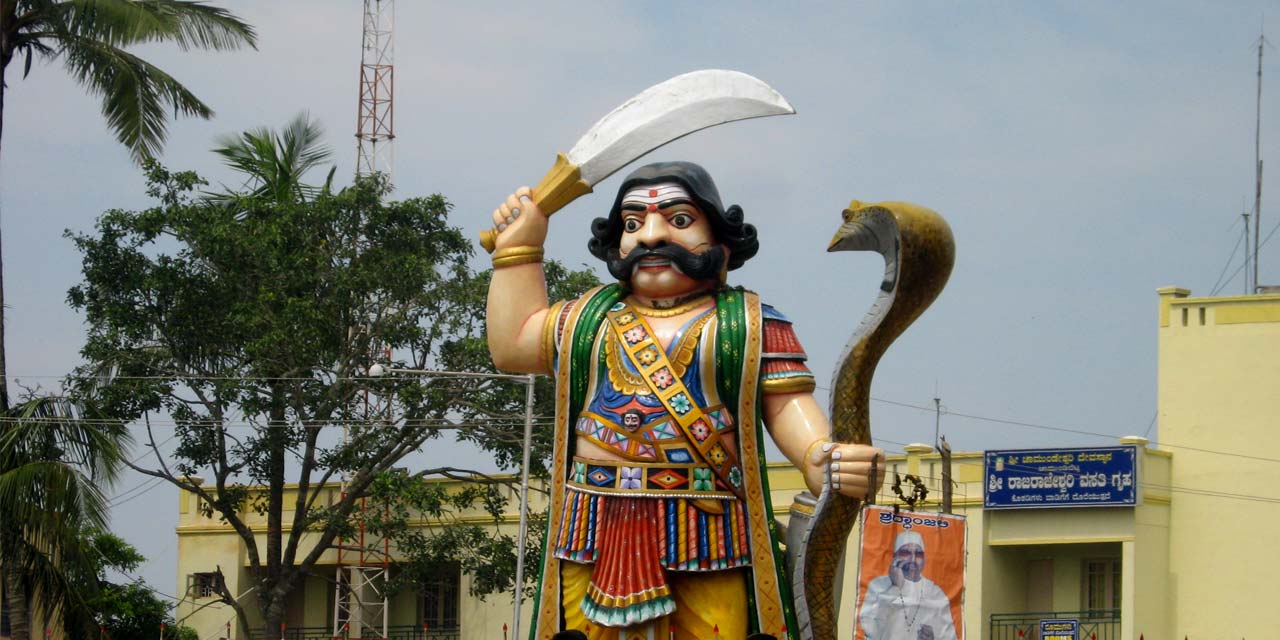 Statue of Mahishasura and Nandi: Gigantic and colourful statue of demon Mahishasura, located at the summit of the Chamundi hills is impossible to miss. This buffalo-demon is seen holding a cobra in his left hand and a sword on his right.

According to legends, Mahishasura who was the king of Mysore had received a boon from Lord Brahma that no ‘man’ could kill him. This made him believe that he was invincible and he continued with his barbaric behaviour against villagers. Seeing this, Goddess Shakti appeared in front of him in the form of Goddess Chamundi and slew the demon.

Located on the 700th step of the Chamundi Hills is the massive statue of Nandi Bull that allures every tourist. It has a height of 16 feet and a length of 25 feet. This statue is said to be more than 350 years old and has been built from single black granite rock. 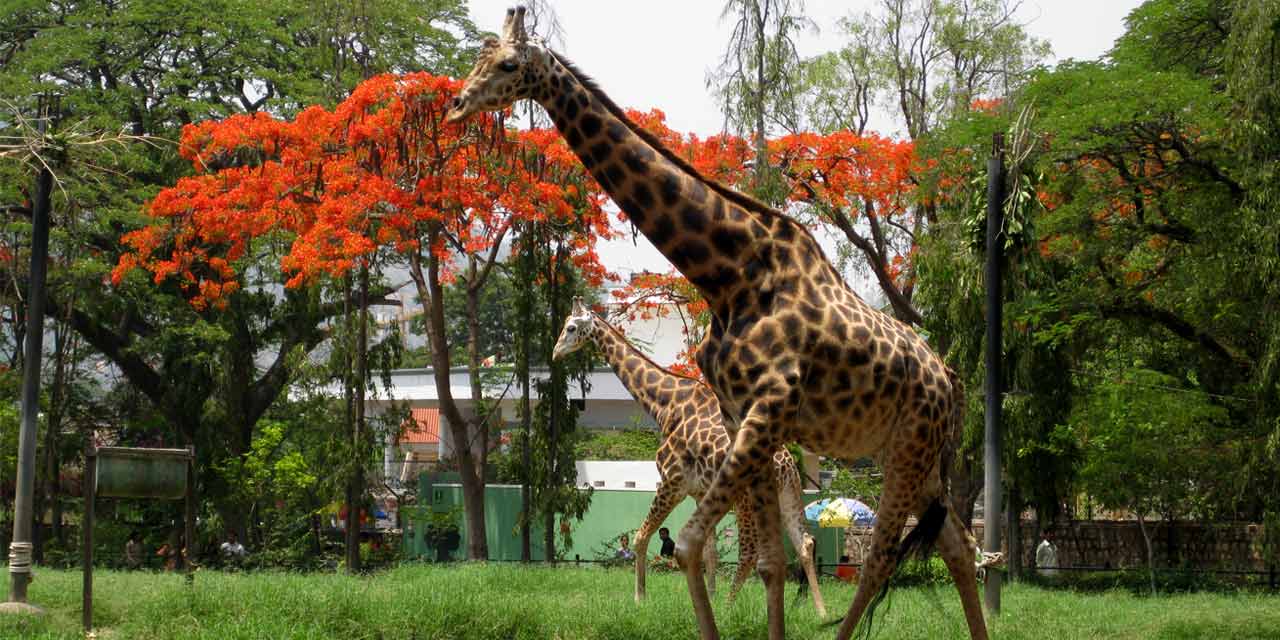 Mysore Zoo: Formally known as the Sri Chamarajendra Zoological Gardens, Mysore Zoo is famed to be one of the oldest and the largest zoos in India. It is spread across 157 acres and the striking feature of this zoo is the option for one to adopt animals and other species.

This 125-year-old zoo had a record number of housing various avian species, which are more than 40 other countries in the world. Currently, it is home to 10 elephants, 5 green anacondas, giraffes, zebras, lions, tigers, white rhinoceroses, and baboons.

The zoo is a huge one and may require a lot of walking. It is advisable to wear shoes and caps. There are refreshment centres inside the complex to make your sightseeing comfortable. 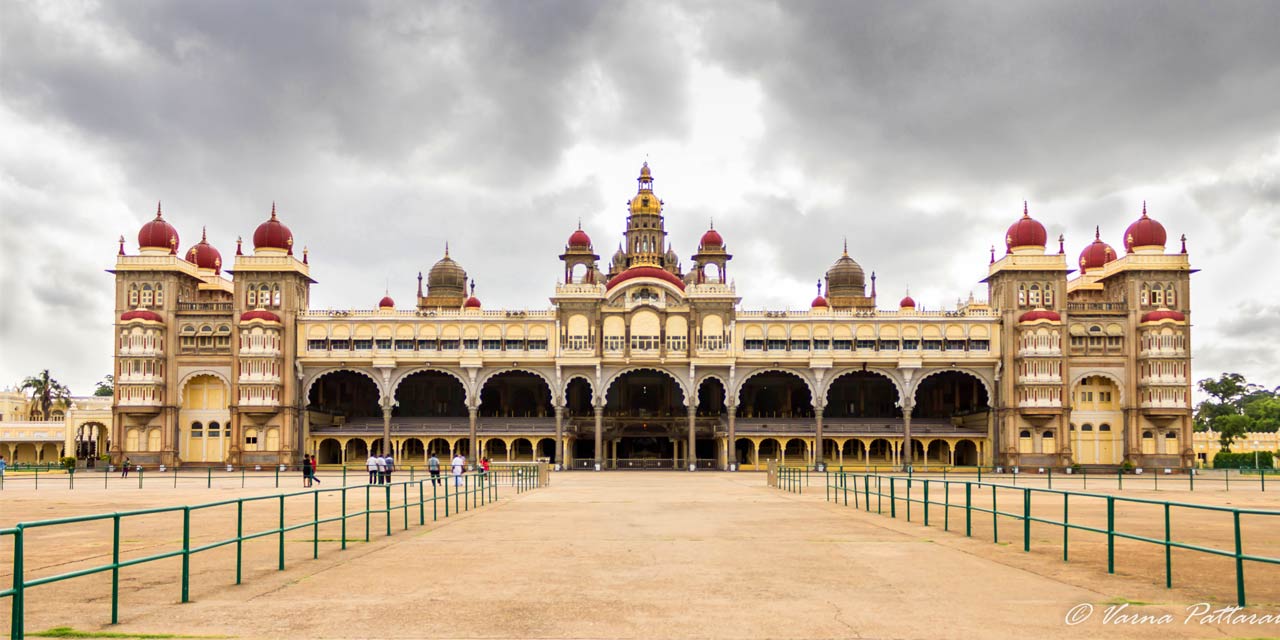 This three-storey palace is constructed using grey granite stones for its main structure and pink marbles, primarily used in its domes and is surrounded by large gardens. There are three independent temple buildings and eighteen small temples, two durbar halls and various courtyards within its complex.

The interior of the palace is a piece of art and is much appreciated by architects and designers for its carved doors, elegant chandeliers, admirable glass ceiling and the various paintings that it houses. The opulent detailing of each item inside the palace perfectly matches with its grand exteriors. 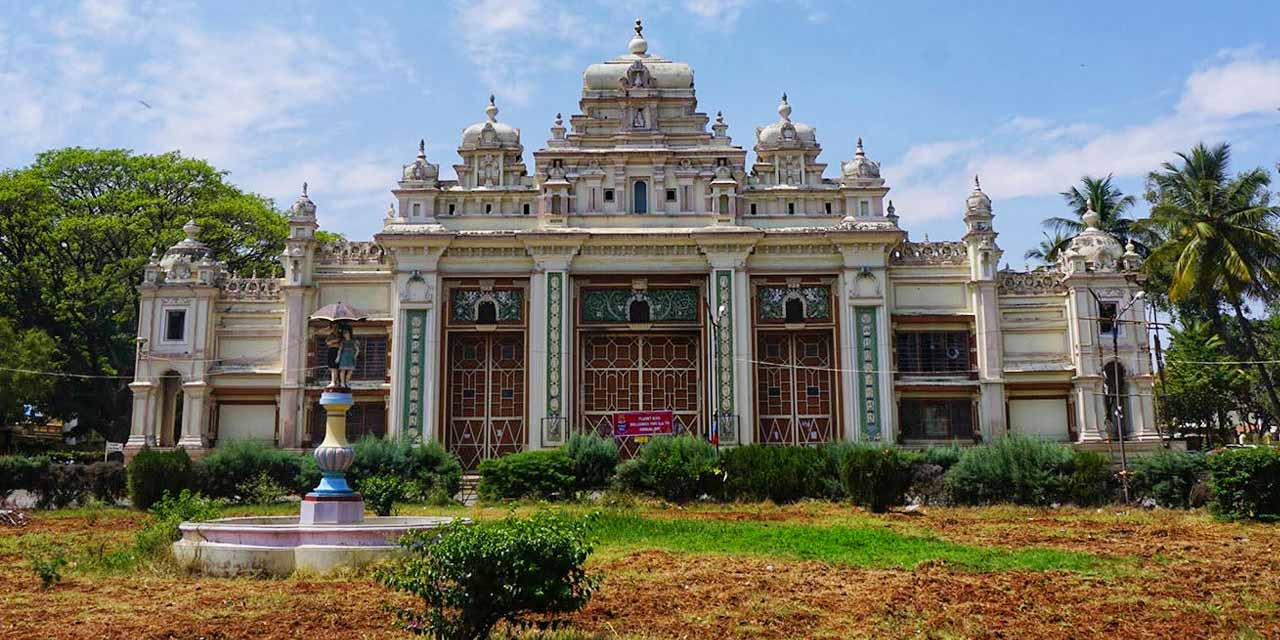 During Navratri, the temple is flocked with tourists and locals who visit the auditorium to become a part of the cultural programs where one can witness classical dance and musical performances. 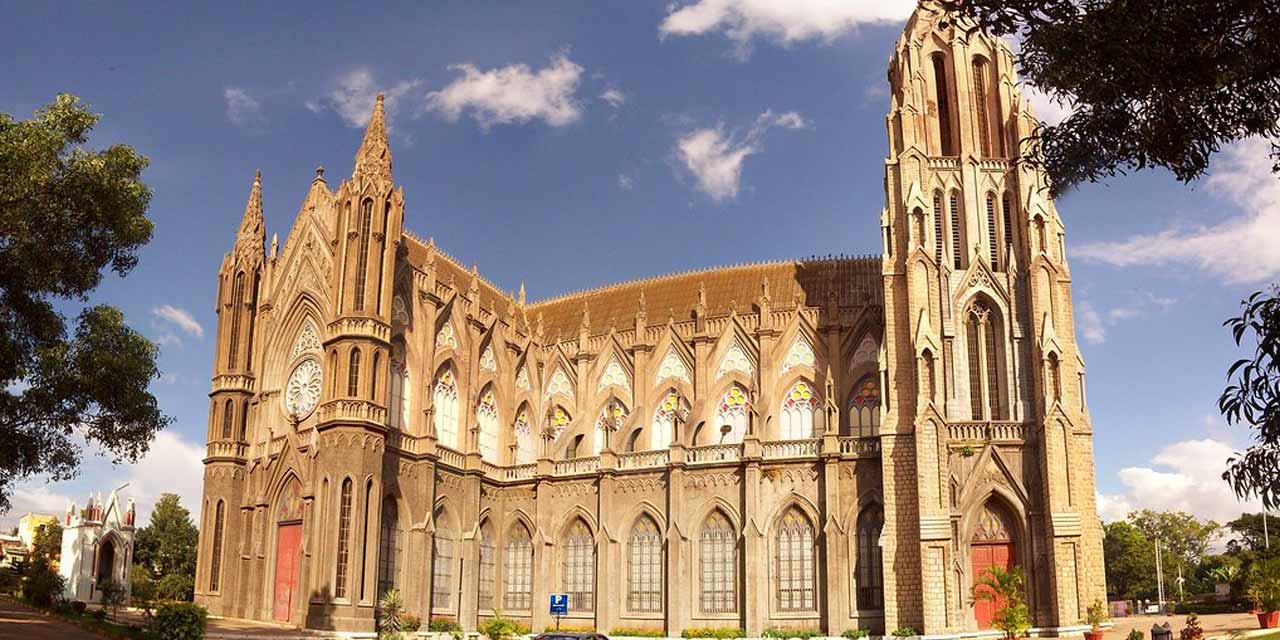 St. Philomena's Church: With the fame of being one of the largest churches in India, this majestic church captivates everyone with its architectural excellence. It also boasts of being the second largest church in Asia.

It is said that St. Philomena's Church’s Neo-Gothic style of architecture was inspired by the Cologne Cathedral in Germany, especially the towers that strike a close resemblance with each other.

Photography is strictly prohibited inside the church, however, one can take pictures with the marvellous building from the outside.

The enchanting and quiet environment of the Church brings you a sense of calm and is a must-visit during your 1 Day Bangalore to Mysore City Tour. Brindavan Gardens: Brindavan Gardens of Mysore is undeniably one of the best terrace gardens in the world, especially famous for its symmetric design and illuminate terrace gardens. It was built by a gardening enthusiast, Sir Mirza Ismail, who was the Diwan of Mysore during the early 90s. It is adjoining the Krishnarajasagara Dam and is visited by approximately 20 Lakh tourists every year.

This 60 acres garden is divided into three steps, and each of these is adorned with various flowers like celosia, marigold, bougainvillaea amongst many more. Visitors can also enjoy boating in a lake which is present within the premise of the gardens.

A must place for sightseeing in Mysore, Brindavan Garden mesmerizes everyone.

Our travel experts have designed the Bangalore Mysore tour package with such precision that you can visit almost all the significant places in and around Mysore in just one day. Our one day tour package also includes a trip to the historical town of Srirangapatna where you can visit Srirangapatna Fort, Gumbaz, Tippu's Summer Palace and Sri Ranganatha Swamy Temple.

In Mysore, you can explore the architectural excellence of Mysore Maharaja Palace, St. Philomena's Church and if time permits visit Jaganmohan Palace as well. Visit Chamundi Hills, and offer prayers at the Chamundeshwari temple amidst the scenic beauty of nature. Witness the massive statues of Mahishasura and Nandi. Relax amid the mesmerizing landscapes of Brindavan Gardens. Visit one of the largest zoos of India, Mysore Zoo. Spend a day enjoying away from monotony of everyday life as our travel experts take care of everything related to your travel. What makes it even better is the cost efficient pricing of our packages.